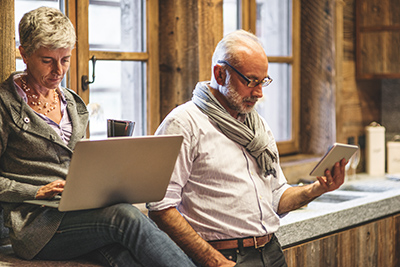 Often when people think of getting older they envision a wonderful retirement which involves giving up the day-to-day grind and work stress, having more time and energy to do the things they want to do, and having financial freedom.   However, for many people, getting older is not a dream.  Instead, it is a significantly challenging period of life worsened with psychological stress brought on by constant experiences of ageism.

According to a 2011 Statistics Canada Census, 9.6 million people, 3 out of 10 Canadians or 29% of the total Canadian population, were classified as baby boomers.  The baby boomers today, in 2017, would be between 52 and 71 years of age.  In a related 2011 study, the Conference Board of Canada pointed out that nearly one-third of the baby boomers had to delay their retirement plans due to the market crash and subsequent recession of 2008.  Today, the Conference Board’s reports are focused on growing concerns with the baby boomers leaving the workplace.  However, there is still a large portion of the baby boomer population who are struggling to stay employed longer or are seeking employment after being displaced from their previous employment.  They have found themselves in financial crisis often due to a combination of further economic declines and poor financial planning.

Gaining or maintaining employment is often challenging for the baby boomers because of their experience with ageism.  Ageism refers to the stereotyping and discriminating against an individual because of their age.  It often involves applying false stereotypes to the elderly and changing the way one treats older people in regards to their competence or value.

Three factors contribute to the formation of ageism.  First, a socially constructed way of thinking about older persons arises as a result of stereotypes about aging.   Stereotyping refers to thoughts, attitudes, and beliefs that are adopted and result in a tendency to attribute certain characteristics to individuals that are part of a particular group.  These categorizations are typically the result of incomplete or distorted information that is accepted as fact without question.  Though it is impossible to generalize the elderly population when it is made up of such diverse individuals, society has a tendency to categorize older individuals as becoming less competent, more dependent, and increasing burdensome.

The second factor is that society is structured based on an assumption that everyone is young.  Society tends to glorify youth, associating it with beauty and strength, whereas elderly are often associated with grumpiness or hostility.  Programs, services, facilities, systems, and employment are designed around the assumption of youth, failing to address the needs of elderly people, and subsequently restricting the elderly’s access.

The third factor is subconscious thoughts, feelings, and behaviours individuals have about someone because of that person’s age.  Thoughts, feelings, and behaviours are moulded by societal definitions and enhanced by the individual’s personal experiences.  The subconscious mind has the tendency to have heightened awareness and attention for negative experiences.   Our minds also have a cognitive bias in that we tend to pay more attention to experiences that reinforce our previous attitudes or beliefs.  As a result, some people are more attuned the minor errors of age (e.g., a senior who experiences of moment of memory weakness) and use that to justify their previous beliefs (e.g., that elderly people are incompetent).

The greatest psychological impact of ageism is a deterioration of self-esteem.  When an individual’s self-esteem is impaired, there is an increased likelihood that they will experience depression, anxiety, social withdrawal, diminished self-confidence, emotional turmoil, and cognitive weaknesses (e.g., working memory skills, reasoning, planning, goal setting, decision making).  Furthermore, psychological stress can take a toll on the individual’s physical health which creates more psychological stress regarding physical well-being.

Unfortunately, ageism reinforces ageism.  When an individual experiences the psychological stressors of ageism, his or her abilities are impaired causing them to be less confident and competent, and more dependent.  These impairments, in turn, reinforce others’ negative attitudes and beliefs about aging.

It is true that as we age our physical and psychological abilities decline.  However, the degree of decline varies greatly between individuals and it cannot be generalized to an entire population.  If we allow ageism to thrive, elderly individuals will experience further psychological distress which reinforces the fallacious attitudes and beliefs of ageism.  Instead, individuals, regardless of age, need to be treated and assessed on their own merits instead of on the basis of assumption.  Elderly individuals should be given the same opportunities and benefits as everyone else.